Terry Engle is my full time , part time helper and has been since 2000 so i ask him to write something up in regards to being here since then... Heres what he had to say in his words ...

Around 2000 I got a call from Jim Linder (hot rod club friend) wanting to know if i was interested in some work at his Fuel Injection Shop on Gasoline Alley here in Indy , for a couple months?

I had retired from the purchasing Dept at Allison Division of General Motors in 1996. Allison makes heavy duty transmissions for off road, highway, school buses and fire trucks along with several heavy duty applications.

After being retired for 4 years , i had lost interest in spending my spare time at home so i told Jim, fine.

One day i mentioned to Jim that i was going to the World of Speed at the Bonneville Salt Flats. He commented that he had always wanted to go , but never took the time, to which i replied, I will mention that to you at your funeral.  Thats all it took and we were on a airplane heading out west !!!!

( Flathead production Pickup) the truck was done in approx 6 months .

The following year several of us again headed west to see what the new truck would run on the salt "flats".  After a few passes we found that no matter what we did , 97 mph was the limit. The record was 101 mph and we had ran 108 on the interstate around Indianapolis. The Salt Flat Air Density done us in !!!

The next thing on the list was building Tear Drop trailers in the shop behind the main shop. Jim had restored a orginal "KIT" teardrop trailer and every where he went some one wanted one. After building quite a few (31)  and a few hot rods Jim sold the trailer business to a local person.

Now you got to remember , I'm still on the  part time employee list but my few months are starting to turn into a few years !

After some 19 years on the Alley , Jim decided to downsize the business and move his shop to main street in Speedway about 5 blocks for the Indianapolis Moro Speedway. Great location was a old tool rental building and was very car oriented shop. We did Injectors and Distributors in this building for 8 years . Jim sold the injector business and closed the building as his office manager had told him she was retiring ( after 24 years) .

Jim kept some of the Vintage service equipment and sold everything else , Moved some equipment to his garage at  home . I figured his idea of downsizing would also mean me, but he still ask me to work some helping at home . I work three hours a day three days a just to keep him straight.

My job is to dis assemble the early Ford distributors and clean them to look better than new . Jim then assembles them, runs them on a tester and out the door they go.

​My part time job has turned into 19 years , Jim likes to tell every one that my first job was to paint a wall and i never got it finished!! 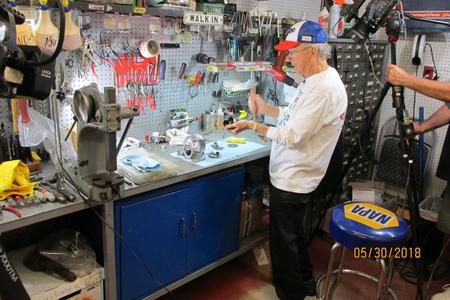