I got this timing idea from Richard on the Ford Barn and love it !!  We made up a drill press jig to drill the factory chevrolet distributor cam and then tap for a 4/40 allen set screw. These cams have a slot that is made up for many different engines in the GM product line up. The slot can be anywhere from 12 degrees (#24 slot) up to 19 # 38) degrees . Using this set up we can adjust the distibutor advance to the desired advance . Each turn of the allen screw is equal to 2 degrees. When used on the flathead conversion we adjust to 18 degrees at 2500 rpm. After doing over 1000 of these units we have found thats almost perfect....

NOTE !  WE NO LONGER DO THIS SERVICE BASED ON LACK OF UNDERSTANDING AND INTEREST. HOWEVER CHARLIE (ON THE FORD BARD) MAKES THIS MODIFICATION. GET IN TOUCH WITH CHARLIE ON THE BARN. 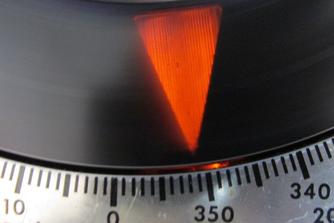 Fords idea of timing the helmet was a bit different for the time with no actual timing adjustment needed ..   Assuming the distributor was adjusted correctly with the correct contact spacing and the slide bar centered there was no need to move the actual housing . Just align the drive slot and tighten the housing to the engine. Everything should be good from there!! The drivers side contacts determined when the ignition actually fired and the passenger side controlled the dwell ( or how long the coil built up) For every degree the drivers side contact is off the engine timing is out of time  two degrees.
Arcing at the contacts ( drivers side) also changes the ignition timing when the condenser is defective. Each condenser has a spec for series resistance, capacity and leakage. Any one of the three out of range will cause a timing change as well.

Lets use Henry for stability on the subject, production flatheads ( starting with the helmets 32-41) started with 4 degrees of advance in the distributor (thats 8 engine) at 2500 rpm.Theres some variation with different models ie: 18-40A-40B-68 etc  each model has a little something different , like distributor cam being big and small , different contacts with best being the model 11A using 11 degrees for 22 degrees engine.. So 16 degrees is a good number with the highest being 22 degrees. This covers the helmets fro 32-41 with 60 engine usin g a higher max rpm for the advance.
Starting in 1942 the two bolt crabs all have 11 degrees or 22 engine at 2000 rpm. You could check a hundred crabs and they will all have the 11A disc in the distributor and give you a solid 22 degrees every time once cleaned and lubed...
Then starting in 1953 with the vacuum only loadamatic the advance used was
15-17 crankshaft degrees at 4000 rpm. ( specs from manual). This was seldom seen unless the engine was in perfect tune. And it very seldom was hauling corn from the fields etc...

Now lets talk about us and our flathead invlovement. My first real work on these distributors started with the Newport Hillclimb in Indiana with the record set by a stock flathead . ( at least thats what they said). Most of these engine builders wanted more advance and wanted it sooner than stock.
Then on our Bonneville engine we used a chevrolet brain set and put in 24-30 degrees of advance . Once we finally got to dyno the engine we found that was way too much for max torque etc..We now run 20 degrees.
We have done over 1000 of the chevrolet conversions and the first units were mostly 22-24 degrees using a stock chevrolet advance cam with a bronze bushing..After doing some work for Richard and Ole Ron i copied Richards methods of adjustment either using a machined brass bushing OR a allen screw adjustable unit. Depends on what exact chevy advance cams i have from the core box. These cams from GM have different slots for different degrees of advance. From 22 to 38 degrees etc. I have had only two people ever say the distributor didnt run good!!
So today after listening to every builder in the country most are adjusted at 16-18 degrees of advance with springs set for 2500 rpm. 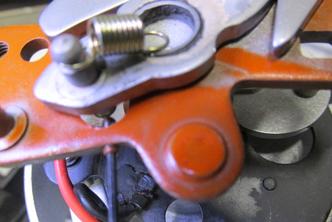 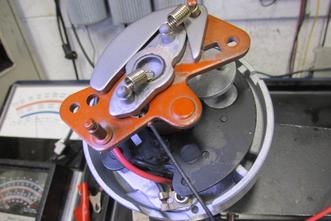